The Cultivation of the Speaking Voice
by John Hullah 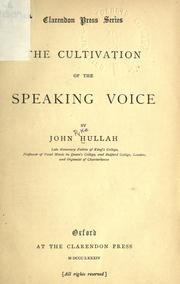 Preface excerpt:
The Cultivation of the Speaking Voice is the subject of two articles which, under that title, appeared in The Contemporary Review for March and July, 1869. It was suggested to the writer that, with some alterations and additions especially more precise directions for carrying his theories into practice—they would form a manual likely to be useful
to many, and not unfit for admission into the Art Series of The Clarendon Press. By the kind permission of Messrs. Strahan, these articles have become a book, which is now laid before the reader.

The book includes chapters on the human voice, the vocal registers, respiration, speech and song and other aspects of the voice which may be of interest to educators and singers.

This ebook was digitized with funding from Microsoft Corporation in 2007 by the Internet Archive where it may be viewed and downloaded in various formats. It has been provided here for education and research in epub and mobi format.