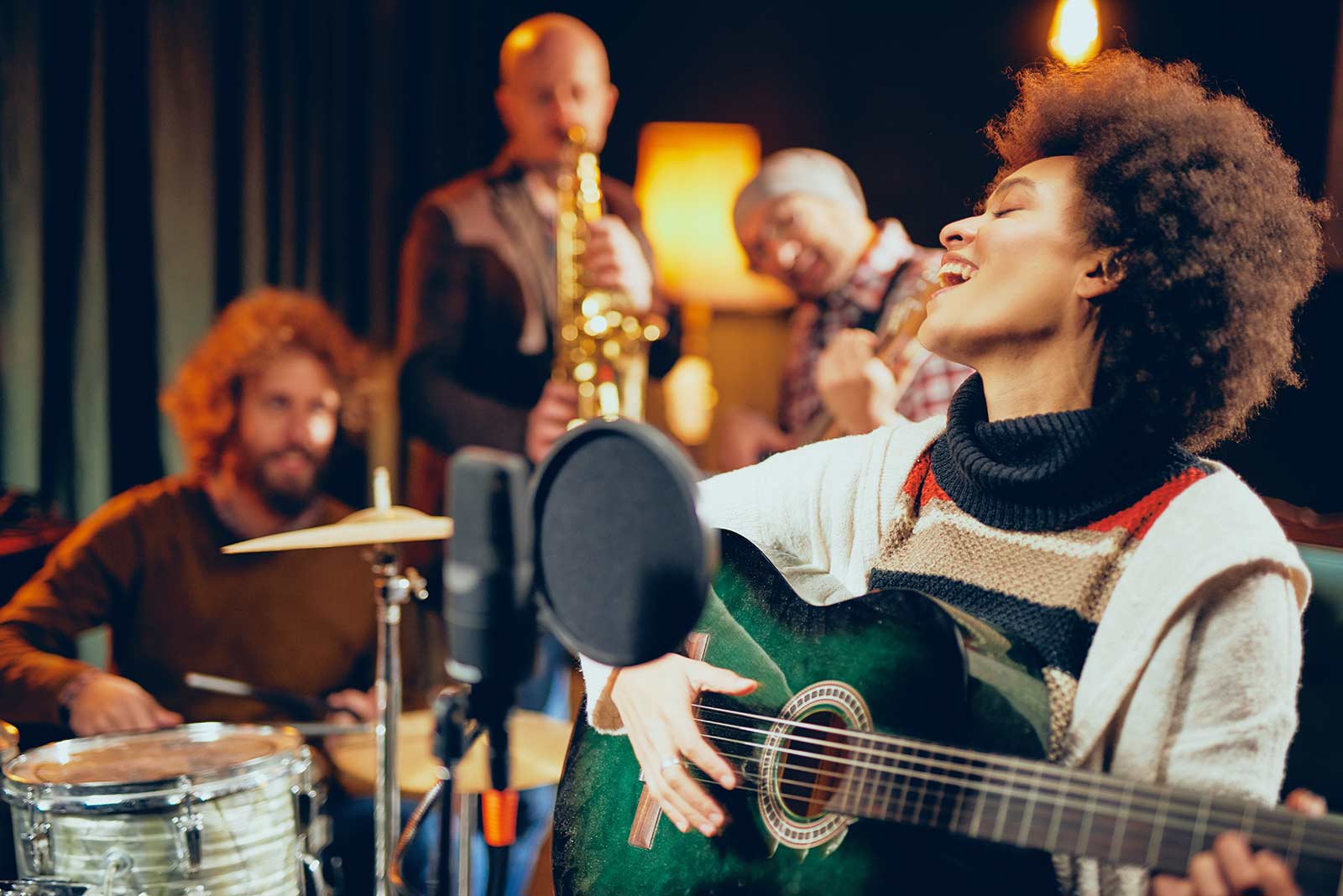 A ‘House Band’ or ‘in-house’ band is the term used to describe session musicians or a band who are employed on a regular basis and paid a fixed wage which may be supplemented by bonuses for commercial success.

A record company ‘House Band’ work regular studio hours, they are proficient sight readers who are contracted to play anything that the company requires. This ranges from short jingles to fully orchestrated songs destined for commercial release by a major artist. Their fees are paid at a set rate, regardless of wether the songs on which they perform are released or become hits, although in most cases the company will pay bonuses or a repeat fee to those who have performed on successful tracks.

The ‘House’ or ‘Resident’ Band employed by a venue can be a completely different kettle of fish! The musicianship varies considerably from the professional sight reader who is competent at providing accompaniment for guest artists of any genre and style, to the local band who are hired to entertain the audience on a regular basis. This usually applies more to the ‘Cabaret’ or ‘Club’ circuit, but a ‘House Band’ can be encountered at all types and sizes of venue performing repertoire consisting entirely of ‘cover’ versions of popular songs.

The fact that a band is hired on a regular basis is no guarantee of their technical ability and unlike a band who work a ‘circuit’ or variety of venues, they are not expected to have a fan base. A singer who is part of this type of band will need to have a wide repertoire and be prepared to supply backing/harmony vocals if required by the guest artist.

Originally a house band was hired by Theatres and large Clubs who could afford to pay a reasonable fee for quality musicians, but the concept became popular with other types of venue and the standard of musicianship varied in direct relationship to the amount of money that the management paid. This disparity has caused a lot of confusion and frustration for solo/duo singers who are hired to perform a guest slot at these venues!

During the learning process your teacher or class may provide you with an accompanist and prepare you for working with professional musicians, unfortunately this provides a false impression of the standard of accompaniment that you may encounter when entering competitions, auditions or performing professionally.

This is not meant to be a criticism of lesser qualified musicians who provide these services, providing backing without the advantage of prior rehearsal is difficult enough, but there are some pointers that any singer should be aware of and make allowances for which should make the shared experience easier for both parties.

Not all musicians who are employed in a house band are sight readers, many have gained their position due to their extensive knowledge of standards and ability to improvise. This can be a major problem for an artist whose ‘pad’ contains nothing but the latest chart tracks in score format. To combat this problem, it is advisable for the singer to ensure that their sheet music contains ‘chord boxes’ which can be understood by all musicians. A set list displaying the key, tempo and style of each song to be performed is essential. The singer should also endeavour to practise their repertoire using just the chords and counting the bars to enable them to recognise the vocal start point regardless of the way in which the backing is played.

There are millions of published songs in the UK alone and just because it is YOUR favourite does not mean the rest of the musical world has heard of the track/artist – let alone knows how to play it! If you intend to make a living by working in a ‘circuit’ then establish which songs are considered ‘standards’ and keep several handy for the occasions when the musicians indicate that they don’t feel they can do justice to the songs that you have presented to them.

Unfortunately it is rare for a house musician to admit that they are unsure or incapable of playing a song in the same way that it is written on the sheet music. A fact that may not become apparent until your onstage and the music has started! Don’t Panic! There are some preventative measures the singer can take to salvage this apparent disaster or prevent this occuring in the first place!