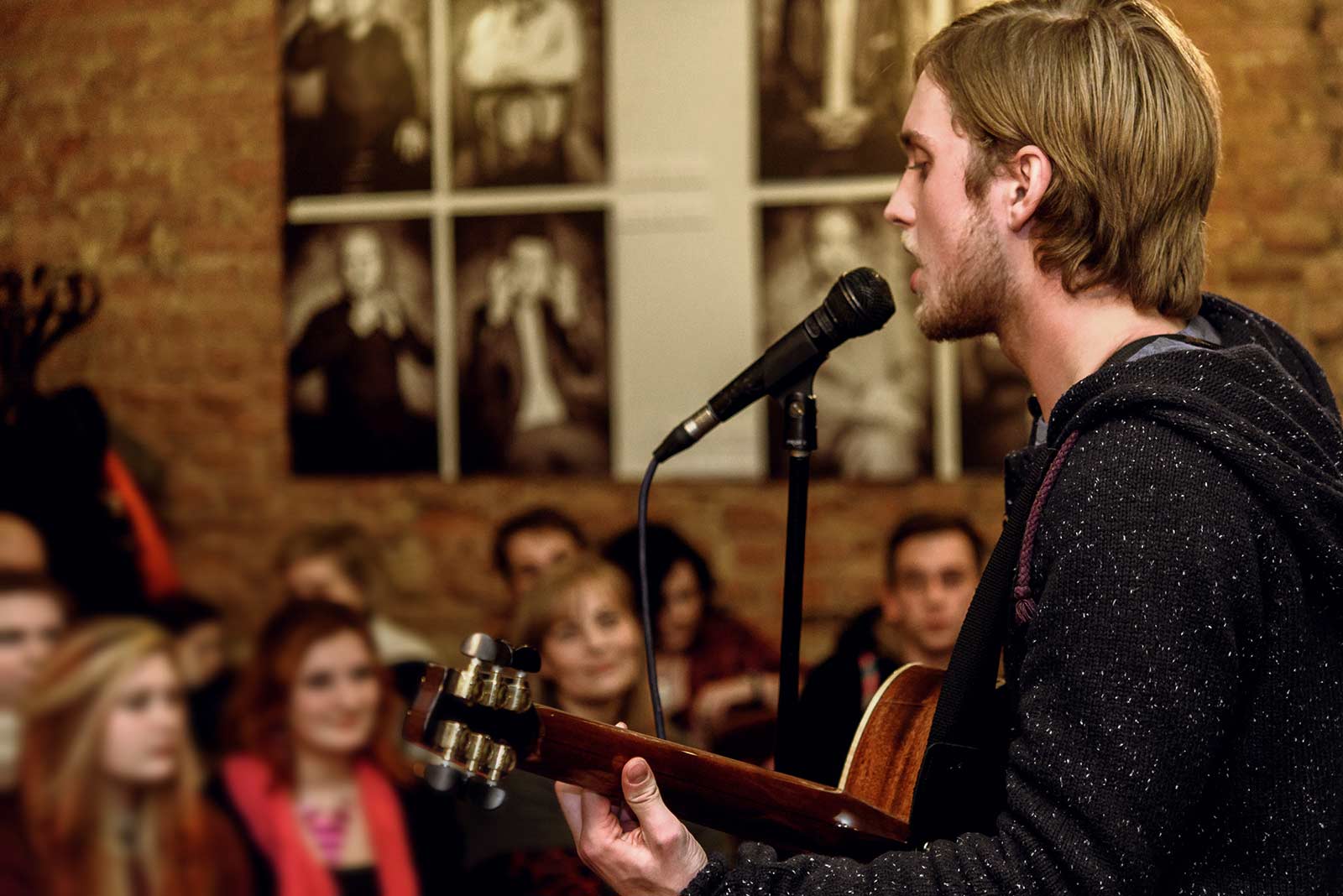 If you’re a first time performer ready to take the next step, a seasoned musician who’s no stranger to the stage, or even just a fan of live music who fancies an evening out, then you’re bound to enjoy spending your evening at an open mic night.

You’ll probably find that there’s at least one open mic night in your nearest town or city – there’s bound to be one within striking distance for you.

We’ve put together this handy guide to help you get into the open mic mindset – starting with the obvious:

What is an open mic night?

An open mic night is an event, usually hosted at a pub, bar, restaurant or coffeehouse, at which amateur or professional performers are invited to give a short performance. The name derives from the ‘mic’ or ‘microphone’ being open to all who attend, regardless of ability or experience.

Typically, there will be a stage or dedicated performance area surrounded by chairs from the other performers and audience members can watch whoever’s playing at that time. Many open mics are amplified, and will have multiple microphones plugged into a PA system, while many others opt for a purely acoustic setup.

The event will usually last a few hours, giving each performer the chance to perform at least once, and giving everyone in attendance the chance to watch a variety of performers.

How do I get a slot at an open mic night?

You can take a chance and just show up on a quieter night, but we recommend contacting the organiser or host in advance to request a slot – many open mic nights are extremely popular, particularly in cities with vibrant live music scenes.

The host will tell you which slots are available on their list, and depending on how far in advance you get in touch with them, you may well have a few different times to choose from. Usually, you may only choose one slot, as other people wishing to perform may not yet have got in touch – but if these slots are still empty on the night itself, other performers will be encouraged to fill them up.

Can I cover other people’s songs at an open mic night?

In most cases, the answer would be: yes, go for it! There are several songs you may want to avoid covering, just because they’re so popular that the chances of another performer choosing to cover them will be much higher – and most people won’t want to hear the same song played twice in one evening, no matter how well you play it!

We’re not saying never play these songs at an open mic night – we’re just telling you from experience that someone else probably will:

Find out whether cover songs are allowed beforehand from either reading about your chosen open mic on its website or social media, or messaging the host. Most open mics won’t have any rules in place regarding whether you can play covers or are only allowed to play songs you’ve written yourself, but some do – so it’s better to find out before you’re stood on the stage and get stopped!

Can I play original songs at an open mic night?

For songwriters, an open mic is a great platform to test out new material and see how it’s received by a casual audience. It can also be a useful way of you practising your song in a more pressurised environment (albeit a friendly sort of pressure!).

As we mentioned, some open mic nights might have an ‘originals only’ policy, or may even host the occasional ‘originals night’ – so those are the events to aim for if you do want to share your original compositions. An ‘originals only’ policy can be a great way to encourage creativity amongst a local musical community – it might even be the very challenge you need to grow as a songwriter!

If you are planning on performing an original song, it’s important to bear in mind that the people you’re performing it to won’t be familiar with it. This isn’t necessarily an issue, but it does mean that in order to win over new fans, you’ve got to perform your original song as well as possible.

Do I need to bring my own instrument?

It’s common to bring your own instrument, although some open mics have a ‘house guitar’ and may also have other instruments set up for performers to use, such as bass guitars, keyboards and drum kits.

If you play a more portable instrument such as a guitar, feel free to bring your own along – you’ll often play better using an instrument you’re more familiar with, plus you don’t have to worry about upsetting the instrument’s owner if you accidentally damage it!

If you play a wind or reed instrument such as a saxophone or clarinet, it’s probably more hygienic not to share one with other players on the night.

Can I sing to a backing track?

Not everybody plays an instrument, and if you don’t, this shouldn’t be a reason for you not to perform. If you perform as a duo or group, or have a musical partner who can accompany you, this would do the trick – but if not, a backing track may well be the way forward.

It’s worth contacting the host of the open mic night you’re hoping to sing with a backing track at in advance, as while you can plug your phone into even basic modern mix desks with little difficulty, you can’t guarantee that the open mic night you’ve chosen will actually have a mix desk, or even any microphones.

It’s useful if you have the backing track ready yourself on your smartphone or mobile device. If you’re singing an original song, you’ll likely already have an instrumental version of it on your device you can use, or at least be able to get your hands on one – but if you’re covering someone else’s, especially if it’s famous, look on YouTube and search for a free karaoke-style backing track – there are plenty of them out there!

Can I bring a lyric sheet?

Especially if you’re a new performer, you most likely won’t be expected to have memorised all the lyrics, so there will likely be a music stand for you to rest your lyrics sheet on. Alternatively, if you use an iPad or similar tablet to read your lyrics from, ask ahead if the organiser has an attachment to connect your device to the microphone stand.

If you’ve ever watched a performance given by someone reading from a lyric sheet, you may well have seen them fumbling for the right piece of paper, or even scrabbling to pick up pages that have fallen to the floor. This isn’t much fun for anybody, and if it happens to you, will eat into your precious allotted time – so here are a couple of quick checklists to get you into some good habits:

If you are using a lyric sheet:

If you are using a tablet or similar device:

As with any performance, the more you have memorised, the more confident you’ll be, as you won’t have to rely on any external factors – which leaves much less scope for anything going wrong.

How long can I play for at an open mic night?

Each open mic event lays down its own ground rules, but several follow the general rule of a 3 song or 15 minute limit. This is considered to give the performer enough time to shine on the stage, whilst leaving plenty of time for the other performers to get up and have a go.

We strongly advise you to a) not rush through your songs, as this will leave a gap at the end of your set and b) not run over your allotted time, even if everyone else seems to be enjoying what you’re doing. It’s best if everyone honours the list – this helps the host treat all performers fairly.

It’s not unheard of for performers to play again later in the evening once everyone has had a turn, so if you do have a fourth song or an extra 5 minutes of music you didn’t manage to fit into your slot, stick around until the end!

How should I behave at an open mic night?

While there isn’t exactly a code of conduct, basic politeness is expected. Make sure you show up in time for the night to begin if you can – at the very least show up well before your booked slot, as being late for this will disrupt the schedule and could affect when other performers get to play.

As open mic nights vary so much from place to place, it’s more of a case of reading the room when you get there. Some nights are much quieter, sometimes even foregoing microphones and amplifiers – so it’s way more noticeable, and therefore distracting for the performers, if you chat amongst your friends while they’re playing. Others are much more relaxed about background noise – just take note of what everyone else is doing, and think about what would distract you when you’re up there.

Finally, try not to leave straight after you’ve performed, as this will look to the other performers as though you’re not interested in watching their slot. Stick around at least for a few more slots once you’ve had your turn.

Then, once it’s time for you to go, try not to leave in the middle of somebody’s performance – as you may well experience at some point, it’s not very encouraging to watch people walk out when you’re mid-song! And if you have no choice but to leave during a performance, definitely do not walk in front of the stage on your way out – the audience won’t appreciate you wandering into their line of sight!

What else happens at an open mic night?

Open mic nights are a far cry from karaoke nights – not only are you more likely to get live musical performances, both vocal and instrumental, but you also might witness something else entirely.

While most open mic nights that don’t specify that they’re dedicated to one style of entertainment in particular will mostly be music focussed, you can also expect to hear spoken word poetry, live dramatic readings and stand up comedy – so if you ever fancy trying your hand at that, an open mic is still the place to go!

Can I get a gig if I perform?

It’s a definite possibility – open mic nights are brilliant for networking with other performers and venue owners. If your open mic venue also hosts gigs, then it’s likely the same staff who organise the gigs will be present – so they could well be watching!

Your open mic set could also be the first time your future collaborator hears you play. You never know when or where you’re going to find a kindred spirit whose style complements yours – but you’ll be a lot closer to finding them if you put yourself out there!

For both of these reasons and more, see if you can join your open mic’s mailing list or group on social media. This will be a good way for you to get to know the local music community, as well as a good way for them to get to know you – plus, you’ll get to hear about special nights and even support slot opportunities at upcoming gigs.