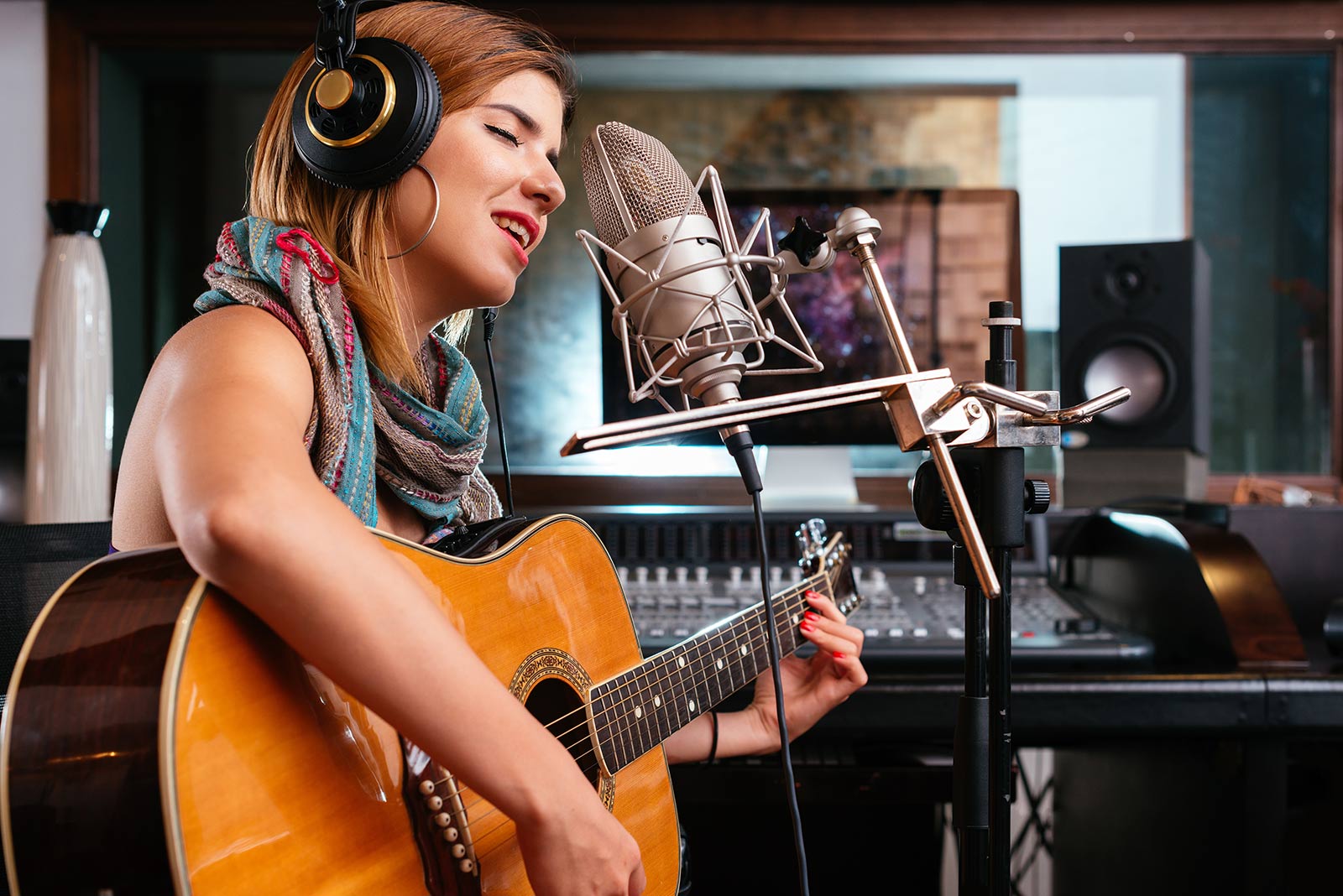 The solo singer or artist has a lot in common with the Lead Vocalist. Both are required to be proficient at keeping in time and tune with the music, whilst entertaining and communicating with an audience. A solo artist should be reliable and competent at performing with both live and recorded backing.

Soloists are singers of any style who perform as individuals, this can mean anything from singing a ‘solo part’ in a choir to performing all the songs alone. (for those who have asked – Yes – Acappella does count!) but for now, we will stick to the solo artist who performs their own show.

Solo artists can work with their own equipment (backing tracks, p.a., accompanying themselves using a musical instrument), pay ‘session musicians’ or an ‘accompanist‘ to play the music or perform at venues that employ a ‘house band’ or ‘session musicians’. The latter two options require a ‘Pad’ which is the name given to describe a folder containing the sheet music for each song that will be performed during the show (with a few extra’s in case of encore’s). The ‘Pad’ should also contain a setlist with the key of the song written next to the titles, listed in order of play for the singers and musicians reference.

All songs should be written in the correct key for your voice with an arrangement that suits your style of singing and clearly indicating the key, style and tempo required. Try and purchase sheet music that isn’t too ‘busy’ and provides chord guides. This will ensure that you can recognise the song being played even when the musician is not a sight-reader, as this allows them to follow the chords and supply their own ‘fills’.

Make two photocopies of the original sheet music (an Arranger often supplies a copy). The photocopies can then be carried to all the gigs (always keep one as a spare in case of loss or damage), whilst the originals remain safe and dry at home.

The photocopies should not be ‘taped’ or ‘stapled’ together, as this makes it difficult for the musicians to turn the page. Use a clear plastic pocket to keep each part in order and prevent tearing or damage.

The ‘Pad’ needs to contain parts for each musician expected to accompany the singer, i.e., drums, guitar, bass, keyboards or even full orchestration (sometimes referred to as a score) including strings, brass and backing vocals! Each piece of sheet music should be written in the correct key for the singer’s range, although most professional musicians are competent sight-readers and can transpose the music as they play, it’s unfair (and unprofessional) to make their job harder when obtaining the correct music for your performance is relatively simple!

Competent sight-reading singers who possess their own ‘Pad’ may be asked to deputise when musicians require a singer or can be offered session work by producers for particular projects.

Make a backup copy of all tracks purchased in case of damage or loss.

When purchasing multiple tracks, supply the company with a ‘track list’ of the songs that you want in order of preference – saves searching the disc or cassette for the song! Most companies are happy to do this.

If using a ‘mini-disc’ player, move the tracks into the order you wish to perform them then open the small tab at the base to prevent accidentally moving or recording over the songs.

If you have already purchased songs which are contained on several cassettes/discs etc., copy them onto one disc. If you have the equipment you can do this yourself, if not ask the company you purchased the tracks from, as they may provide a ‘copying’ service at a fraction of the cost if you have already bought the songs from them.

Write a track list of all the songs contained on each disc, cassette, cd or dat in the order of play. Include the artist name, key, song length and title and make a spare copy for emergencies (you’ll thank me for this one later!!).

Know your own equipment!! Even if you hire a sound engineer, roadie or operator you cannot always rely on them being available. You should be proficient at setting up and operating your p.a. system and player without any aid or be prepared to hire an experienced sound engineer who can do the job for you. The same applies if you use lighting equipment.

Top Tips when playing an instrument

Keep all your equipment in order and make sure you carry spares i.e., strings, plucks, fuses, leads, plugs, straps.

Purchase a good ‘boom stand’ for your vocal mic or use a ‘radio mic headset’, venues don’t always possess boom stands (or stands of any sort!) which makes it awkward to sing and play. The stand can be adjusted to any angle that you may require. Acoustic guitarists whose guitars do not have ‘pick ups’ should have two boom stands, one for the mic to sing in and one to pick up the guitar playing.

Avoid using sheet music books at live gigs, they are bulky to carry around, tempting for thieves and you rarely perform all the songs in the book. Photocopy the songs to be performed and leave the book at home for safekeeping (and less to carry!)

When using a music stand make sure that it is placed at a level that is easy for you to read and angled so that when the music is placed on the stand, doesn’t restrict the audience’s view of your performance.

Arrive early to your gigs so that your instrument can acclimatise to the temperature of the venue. String players (guitars, violins, bass players etc.,) should allow the instrument to rest for at least half an hour before checking the tuning, then test it again 10 minutes before you start your performance.

So what does it take to become a solo artist?

Pretty much the same requirements as a lead vocalist, which include vocal and communication ability, personality and good presentation (image), however, a solo artist also requires more versatility and improvisational skills, a wider range of songs and good organisational qualities. Because the solo artist does not have band members who they can ‘bounce off’ during a show, they must have good stage presence and be comfortable working alone.

1. When working in venues with different musicians you will discover some are more ‘competent’ than others. Prior rehearsal with the ‘house band’ is rare (and short). The artist needs to have enough songs to cover every eventuality, for instance, if the band are unfamiliar with certain tracks and are unable to sight read proficiently, you may have to substitute them with others that they are more confident of playing.

2. When using backing tracks, you will soon discover that most venues expect a wider repertoire of music. The singer needs to cater for this by ensuring they have enough songs in a variety of styles (within their preferred genre/s of music) for the whole evening’s entertainment with a catalogue of ‘spares’ and a backup disk containing their set in case of loss or damage to the original.

3. Organising your tracks, equipment, bookings and all other aspects of your career is the solo artist’s sole responsibility, even if a personal manager or management company is retained to help with various aspects of your career, they should not control your finances or make major decisions without consultation and approval from you. Learn to manage yourself and your time efficiently!

Unlike the ‘lead vocalist’, the solo singer who performs with backing tracks is the sole focus of the audience’s attention. This means that the performer must also be capable of ‘filling the stage’. This doesn’t mean the singer has to dash from one side to the other and can be accomplished by using their personality, vocal talent and movement or dance to entertain the audience.

Solo artists who are seeking a recording career either as a singer/songwriter or by performing ‘cover’ songs need to research their market. Performers of this style may only be required to perform between one and three songs ‘live’ when they are starting out. Most of these performances will be at ‘showcases’ with other singers. Each venue approached will inform you of their particular requirements but the maximum performance time for a newcomer is usually 15 to 30 minutes which increases to 1- 1/2 hours when headlining at a major venue.

Before approaching A & R and showcase organisers, gain some experience by singing at ‘open mic nights‘ which will allow you to perfect your songs and live performances in front of an impartial audience.

Finding Work as a Solo Artist

Create a publicity pack! Include 3 of your best songs on the demo (songwriters should copyright all songs before submitting or performing them anywhere!).

Contact several Entertainment Agents or Promoters who will request a publicity pack for review or may require the singer to audition for them.

Buy music industry trade papers like The Stage , NME, Bandit Newsletter, or similar publications that run classified ads for singers wanted. You can even place an advert describing your abilities and offering your services.

Use the internet – many music websites offer a free classified ads section for singers, bands, musicians, music industry personnel. Take advantage of this by owning a website that highlights your talents and include the link in your advert.

Keep several Business Cards with you at all times. Don’t miss an opportunity, if a band, musician or producer approaches you at an open mic night, jam night, showcase etc., ask for their business card and give them yours!!

Ask professional singing friends, musicians, voice teachers, performance coaches for an introduction or recommendation to an agent or management company. Also, ask if they will allow you to do a few numbers as a support act at some of their gigs, you may not get paid but you will get seen by the venue, and/or agent who may offer you bookings.

Enter Talent Competitions and offer your singing services for Charity Shows to gain experience, gain exposure and meet other musicians and artists.

Non-songwriting solo singers often team up with songwriters and producers who share their aim for a deal. Other popular and lucrative avenues for solo singers include live performances of covers and production of a Tribute Act.

Opportunities are only limited to the competence and determination of the singer who can find work in pubs, clubs, cabaret, nightclubs, radio, television or as a recording artist.