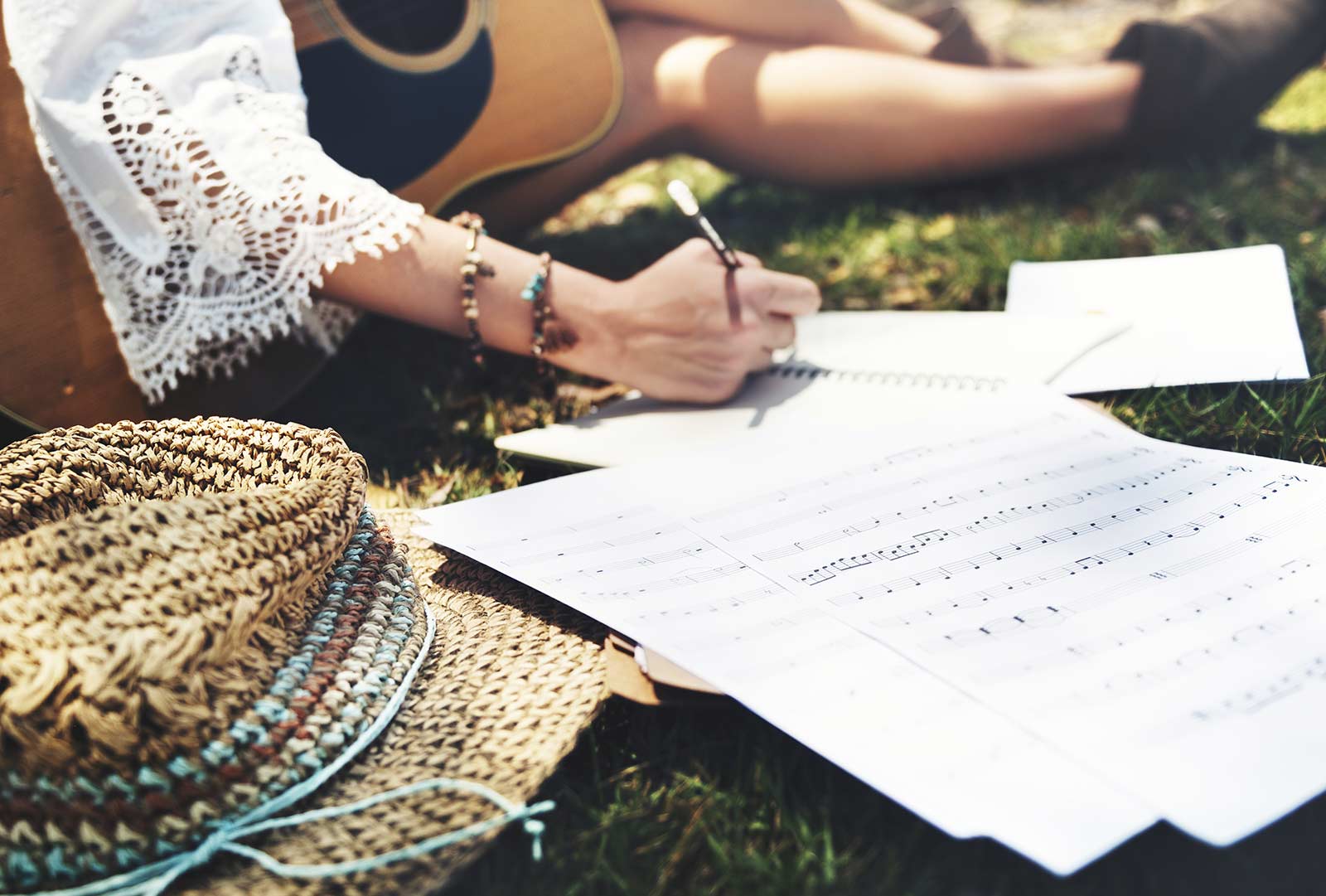 The following are a variety of Songwriting & Composition Competitions and the criteria may vary considerably so please check the sites directly for the latest information, application forms and rules of entry.  Before sending your masterpiece ensure you have:-
‘Copyrighted‘ your original work.
Clearly labelled your application with the writer’s name and contact information enclosing the application form and appropriate fee.

Check the regulations to ensure all songs and compositions entered will remain the property of the writer.  Most specify this but there are a few who claim copyright of your material so beware!

to enter the competition you simply need to create a free profile over at www.audiorokit.co.uk. Make sure that your profile has the following: , At least one song , At least one photo , A bit of text about yourself That’s it! You will be automatically entered into the competition for free. The winner is chosen at random using a program that selects just one member on the Audio Rokit website. Prizes include free song production and one to one advice from a successful songwriter, A&R and artist developer who has secured multiple deals for artists.

The Shure Creative Award will now run as an annual competition, so watch the website www.shurecreativeaward.com for details of the 2009 competition – your chance to win a course of study and develop your network in London at one of the world’s leading schools of contemporary music!

We Are Listening Singer/Songwriter Awards

We Are Listening has brought together an exceptional panel of judges for an extraordinary international song contest – The Singer/Songwriter Awards!

Six gifted artists will be flown to London for a luxurious weekend stay at myHotel and an exclusive recording session with producer Steve Williams (Sting, Eric Clapton, Seal) at Sphere Studios.

As part of the awards and prizes package, selected songs will also be non-exclusively represented by We Are Listening and supported through global digital distribution, sync licensing administration and radio promotion.

We Are Listening also provides alternative prizes in the form of mixing & mastering an entire album, CD duplication, a 6-8 week dedicated US radio campaign and more.

Catering to all genres of music and artists around the world – signed or unsigned – The Singer/Songwriter Awards is YOUR opportunity to get your music heard, promoted and sold.
Visit We Are Listening

Win $2000.00 cash plus a master recording of your song valued at over $1000.00! – Grand prize winners and category winners featured on the Nashville Song Service website! -Winning song will be shopped to the music industry! Visit our contest page: http://www.nashvillesongservice.com/contest.html for rules and regulations, entry forms, and more info.

Entries for the Annual USA Songwriting Competition are currently being accepted. Winning songs will receive airplay on a nationally syndicated radio program plus US$50,000 in Cash and Merchandise.

The UK songwriting contest is now open for entries from beginners, amateurs and professional songwriters, composers, lyricists, bands and recording artists to be discovered by the biggest names in the UK music industry.  Winners are selected by top music industry judges including a BRITS panel, publishers, producers, record label executives and others with entries receiving a special judges report and song analysis. The closing date for entries, comprising an entry form, lyric sheet and CD or cassette, is June 30th and there is an entry fee of £15 for each entry.

Unlike many competitions you are not limited to how you wish to present the song – a simple home recorded tape or handwritten lyric sheet has as much chance of winning as a professional recording as songwriting ability alone is being judged, NOT performance or production.  There are 10 catagories for entries which include Lyrics Only and Instrumental with writers who show commercial potential being offered opportunities for career development regardless if they are winners or not!!! Further details, competition rules and entry forms can be found at :- Songwriting Contest

Wanna be a Pop Star?

International Songwriting Competition
ISC is an annual songwriting competition whose mission is to provide the opportunity for both aspiring and established songwriters to have their songs heard in a professional, international arena. ISC is designed to nurture the musical talent of songwriters on all levels, and promote excellence in the art of songwriting. Amateur and professional songwriters and musicians are invited to participate.
Categories include: Pop, Rock, Country, Folk, R&B, Hip-Hop/Rap, World Music, and Lyrics Only. Entrants may submit multiple songs in as many categories as they wish. Music industry sponsors and judges include established record labels, producers, named artists, musicians and composers.
ISC accepts online electronic submissions (MP3 files) as well as postal mail submissions.
Entries invited – closing date September. For more information click here:- http://www.songwritingcompetition.com

The John Lennon Songwriting Contest
The contest offers songwriters one of the most valuable commodities in the music industry: OPPORTUNITY!   Prizes include contracts with music publishing companies, studio equipment and the opportunity to tour. Overall, winners will split cash and prizes.   One contestant will recieve the award of “Song of the Year,” and will receive additional cash
For more information, click here:- http://www.jlsc.com/

This Annual Competition is open to composers/lyricists who must be a British Citizen or normally resident in the United Kingdom for three years. A Song Entry, both music and lyrics, must be the original work of the composers/lyricists attributed to it, no longer than 3 minutes in length and entries must be accompanied by one typed copy of the lyrics on A4 paper. Only the song title may appear on this lyric sheet in order to maintain the anonymity of the writer/s.   Entrants must submit a recording of the song on cassette or CD. The recording can be made by the artist who may perform the song should it be selected although BBC Television reserves the right to substitute another performer/s. The recording should be of the highest professional quality possible. There should be no other recording on the tape other than that of the song for the competition and only the song title must appear on the cassette or CD.   All writers and publishers must agree to abide by the rules laid down by the British Broadcasting Corporation and the European Broadcasting Union.  Any pseudonyms used by songwriters must be declared at the time of entry with actual name(s) of the writer(s). If it is found that any entrant is in breach of this rule, their song will be disqualified.  Song entries must not be (a) published, (b) extensively broadcast on radio, film, video or television, or (c) commercially released as a recording before Song For Europe 2003 except as shall be determined by the BBC in connection with the contest.  It is understood that certain promotional activities such as club and dance play and distribution of pre-release white labels and promotional copies are allowable before the Song for Europe final, but no concerted or substantial radio campaign should begin before March 20th 2001. All such usage shall be with the prior consent and approval of the BBC.  The composers/ lyricists shall not without the prior written permission of BBC Television permit any arrangement, commercial recording or publication to be made of the winning entry before the Eurovision Song Contest.
Prize(s):
Winning song represents the United Kingdom in the BBC Eurovision News.

Johnny Mercer Foundation Songwriting Award
Honors promising songwriters who encourage and cultivate our Great American Songbook. The award is in the amount of $5,000.00 and is presented each year to one or more recipients.

Genesis Opera Project
Creative teams will be invited to apply for the project (formerly the Genesis Prizes for Opera). New young composers who have not had their work published or performed can find details on their site of this and other composition compositions.

Grawemeyer Award for Music Composition
The University of Louisville School of Music are now taking submissions for the 2004 competition. Entries must be in by January from composers of choral, orchestral, chamber, electronic, song-cycle, dance, opera, musical theatre etc.,

Great American Song Contest
Created by songwriters, this annual contest offers opportunities to have your songs heard by qualified music professionals and advance your songwriting career. A variety of catagories are available including one for Lyrics Only. Instead of just one or two prizes, everyone who enters gets a song evaluation from professionals and there are lots of prizes in each catagory.

International Gaudeamus Music Week Composers’ Competition & Interpreters Competition
Two competitions held annually for composers and performers. A jury selects compositions from submitted entry for performance during the week, the best composition from these is awarded the prize. The Interpreters competition is for performers of contemporary music who participate in the Biennial Rotterdam Music Festival. Workshops, master classes and concerts are also available throughout the festival.

Luxembourg Sinfonietta International Composition Prize
Composers of any age or nationality may submit works for the whole ensemble. Site contains an instrument list and informtion on the competition. This competition is FREE to enter.

National Association of Composers, USA
Annual Composers Competition, supported by ASCAP and BMI. Contest is open to NACUSA members only.

Queen Elisabeth International Music Competition of Belgium
Piano 2003, Violin 2005, Singing 2004
There are several competitions which each have seperate conditions and age ranges. Each sections rules, deadlines and information are available from the site in English, French and German.

Royal Philharmonic Society Composition Prize
Open to Composers under the age of 29 who are studying, or have studied at any conservatoire or university in the UK may enter 3 compositions on one tape for admission to the competition. See site for full rules and other musical competitions that are available.

Toru Takemitsu International Composition Award
Run by Tokyo Opera City Cultural Foundation, this competition was founded by Toru Takemitsu on his principles “Prayer, Hope, Peace”. Each year one judge is responsible for choosing a winner from entrants who may submit a composition for an orchestra (except concerto). Full details including instrumentation is included on the site with an application form. Admittance is free for any person regardless of nationality who is not more than 35.

Nivita Foundation International Song Festival
Karen O’Herlihy, Boss Murphy House, Churchtown, Mallow, Cork, Ireland.  Tel No: 022 23 890, Fax Number: 022 23 048  Email
This Annual International Songwriting Competition is open to songwriters of any nationality and age.
Prize(s): 1st Prize – £5,000, in a combination of Recording Time, Musical Instrumentation, and Money.
2nd Prize – £1,000
3rd Prize – £500
There will be a special Prize for the schools’ section and the winner will go forward to compete in the grand final.
Application Fee(s): £20 application fee

Saltire Society Scottish Song Competition
Kathleen Munro, Administrator, The Saltire Society, 9 Fountain Close, 22 High Street, Edinburgh, EH1 1TF. United Kingdom.  Tel No: 0131 556 1836, Fax Number: 0131 557 1675.   Email
This Annual International Songwriting Competition is open to songwriters not older than 21 of any nationality.
Competition Details:
Established in 1999, the purpose of the awards is to encourage young composers working in Scotland to produce new works. These new works may in the future be used as test pieces for the Saltire competitions. Once sufficient new works have been gathered together, these may be published into one volume. The organization is looking for:
1. Composition Award for a two part Scottish Song in traditional style – or a new setting of a Scottish Song or poem Requirements:
· The piece should not exceed five minutes.
· It may be composed as an unaccompanied piece or as one to be accompanied by not more than four instruments.
· The setting may be for an existing piece of Scottish verse or for a new verse.

The composer’s name should not appear anywhere on the score. A sealed envelope containing the composer’s name, address, date of birth and title of composition should accompany the score. The anonymous entries will then be passed to St Mary’s Music School for adjudication by John Grundy (Director of Music), Tom Wilson (Teacher of Composition) and Neil Macgregor (Teacher of Gaelic). Prize(s): Awards in Classes 7 and 8: A certificate of recognition for the composer and the school (if appropriate). The Society will arrange, if possible, for the successful compositions to be performed at the Scottish Song Competition (either by the choir associated with the composer or by pupils of St. Mary’s Music School). Online Applications Welcome